Now for a more niche and maybe a bit of a sad part of the history of Keisei not many people know about. It's about the history of the Chihara Line, one of the less well known and appreciated stretches of the Keisei network. I think that not many people who are acquainted with Keisei know about this railway line at all, as there isn't much to find online, even in this age and time. This is a story about two railway companies that set up a third company.

In 1942 the Japanese Government Railways Kihara Line (木原線) was forced to merge with the Keisei Electric Railway company. The funny thing about this merger is that the two railways have no connection to each other at all in terms of interconnecting stations. In fact, they didn't even have remotely close lines at all. But this was all supposed to change in the future, as initially, this merge was forced upon the two companies to provide a more rapid manner of freight transport in the Tokyo Bay and the Bōsō Peninsular area. The former Kihara Line is now divided into two parts, now the Kominato Railway (小湊鐵道) and Isumi Railway (いすみ鉄道). The Kominato Railway is still under the subsidiary of Keisei, while the Isumi railway is a standalone company. Now, I don't want to give you a history lesson on the Kominato Railway, as this is quite an unclear area to me and I might give you the wrong numbers and conclusions, so I'll step up directly to the creation of the Chiba Kyūkō Dentetsu.

In the late 1950s it became clear that urban development outside of the Tokyo Metropolitan area began to arise. Chiba Prefecture, a prefecture directly adjunct to the Tokyo Metropolitan area, was one of the prefecture that began to see rapid growth around the prefecture's capital, Chiba City. Around the city 'New Towns' were beginning to be planned and with this an expansion of the public transport network was only natural. One of these New Towns was located in the vicinity of the Kominato Railway around the Amaariki station (海士有木駅) area and promptly a licence to Keisei was issued to build a direct line to connect the Keisei station Chiba-Chūō (千葉中央駅) to provide a fast connection to the town centre of Chiba. However, the plans of the development of a New Town around Amaariki remained plans and remained on the shelf until 1975. 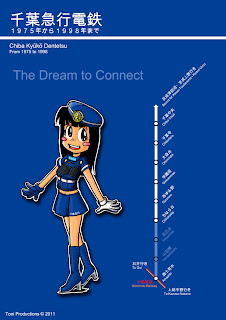 In that year, the plans were revised under the new Urban Development Law and the Chiba Kyūkō Dentetsu (千葉急行電鉄) was created between a joint venture of Keisei and Chiba Prefecture, making it a 3rd Sector railway. So, construction of a line towards the Kominato Railway Amaariki station started and in 1992 the operation of the first section of the line started from Chiba-Chūō to Ohmoridai (大森台駅), with the opening of an extention to Chiharadai station (ちはら台駅) in 1995. This railway line was named the Chihara Line. The entire line was built in a manner to keep costs down, it was built single track, but with the future prospect of operating it eventually as a double track line. So, the track bed is actually a double track prepared line with one side empty. Some stations have two tracks where two trains can overtake one another and have quite basic points, or so it seems by the extremely low speeds they negotiate the points. Maybe these were installed as a temporary measure. It reminds me a bit of the East German Railway lines, where the Soviets removed one side of the tracks as a retaliation and retribution for war damages. It seems a bit tragic to me...

Anyway, after the hopeful opening in 1995 of the stretch to Chiharadai station, passenger numbers were not as high as expected, this due to the bubble burst in the early 1990s, the  slow development of the New Towns in the southern part of Chiba, high ticket fares, depreciation of land value, interest expectancy rates and high land acquisition costs. This led to the bankruptcy of the Chiba Kyūkō Dentetsu in 1998 and the complete overtake of Keisei, leaving Chiba Prefecture out of the business. The final expansion to Amaariki station was never built after that.

It was a dream project of Chiba Prefecture and Keisei to be able to connect the Kominato Railway to the Keisei network and provide good transport to the New Towns in the south, but alas, it was not meant to be. It's kind of funny still see one of the Keisei railway companies/subsidiaries cut off from the main network when there is only a few kilometres to be laid. The trouble is, is that this small stretch would lead passengers to no place of interest, as there is nothing on offer at the moment. However, there are still plans to build this line and Keisei still is the owner of some land en route from Chiharadai station to Amaariki station, so there is still a chance that this stretch will be built, albeit a small one.

The illustration I've made is a tribute to the short lived Chiba Kyūkō Dentetsu which existed from 1975 to 1998 and only operated the line from 1992 to 1998. This was manly done with leased trains from Keisei and Keikyû, which were repainted in dark blue with a white waistline. These are also the main colours I've used in this illustration, whereas the lighter blue depicts the non-existent part of the realised dream, but still is a dream. Laser-chan is dressed up as a Chiba Kyūkō Dentetsu early 3050 Type painted in the early livery (dark blue with a white waistband), whereas the later types (from 1994 on) were painted in a reverse Keisei livery: red and blue bands switched places. See photograph for an example.

It seems to me that this railway company is already forgotten by the general railway fan public, which isn't strange, but then again, I'm a guy who likes stories like these.

Beer of the Post: Rip Tide (Stout);
Location of consumption: my room; 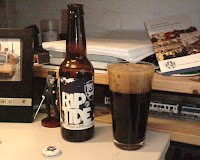 This time I'm drinking something from a country this type of beer originates from: the UK! Oh man, this is truly a good imperial stout beer. Bitter, strong and prominent tastes makes this beer a very pure and joyful experience. The ingredients are few and the design of the bottle is modern and attractive. The brewery, Brew Dog, really wanted to stand out from the rest of the UK market (as is clearly stated on the bottle and their website) and they really do. It's so very much different from Guinness (albeit it being Irish) or Newcastle Stout, not watery and mainstream, but a hardcore and honest stout. Having an alcohol percentage of 8% adds another punch to the pack.

With the first sip of this brew, you can already kind of feel the passion of the brewers for the beer they make. Pure ingredients, no bullshit added, just plain barley, hops, yeast and water. Just the basics to make a good beer. Just like the good old Rheinheitsgebot, just how I like it. The stoutness and strength of this beer makes it also stand out from other weaker porters, which are mostly pretty sweet as well and I don't fancy that much. However, it's all up to the brewer how they call their beer, so one can't really judge a stout or porter just by the name, you have to try it.

Anyway, it's a pretty awesome beer you can enjoy at any time, but can't drink too much in one go. It's a beer enjoyer's drink, not one to go and binge on. Well, you could do so, but then you would end up somewhere you probably wouldn't want to be, with a headache.